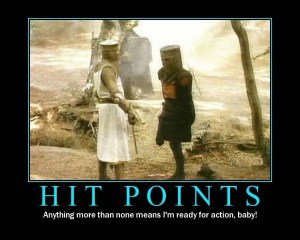 I’ve decided I hate hit points. They’re like a ball and chain dragging roleplaying games down, and yet their presence is seemingly never questioned.

Obviously a game has to keep track of your character’s health. You need to be able to quantify damage taken and given. But are hit points really the best way to do it?

No doubt they’re convenient. But consider the ways they distort the game.

Maybe I’ve overstated the case a little bit. These things do sometimes happen and they’re roadblocks to realism, but hit points aren’t always a detriment to good game play. For instance…

This is the kind of game play you want as a gamemaster, even if it kills the Balrog way too early and you have to improvise the next scenario on the fly. It’s awesome when your players use some imagination and think things through.

Plus, for inanimate objects like bridges, wagon wheels, doors, gun stocks, etc., etc., hit points (or a similar sort of generic damage/durability rating) make sense — as in how hard do you have to hit it to break it? That’s all you really need to know about them in game terms.

But people are a lot more complex. We’re squishy and crunchy, and we bleed. You don’t just take generic damage (aka “hits”), you get injured. Hits hurt. Probably a lot. In exciting stories, as in real life, people sometimes die from a single strike.

And since FAR Western is a game that above all simulates the experience of a character in a story, “you take 50 hits” isn’t an acceptable outcome. Good stories are more specific than that. They help you visualize and vicariously experience the outcome in a way that a generic mass of hit points never will.

So…this is long enough, I think, and it’s getting late. Next post, I’ll tell you a little bit about what we’re doing instead of hit points in the FAR System.